In this blog post, we are delving into World Models (Ha et al., 2018)[1] a recent model based reinforcement learning paper that achieves surprisingly good performance on the challenging CarRacing-v0 environment.

Along with a short summary of the paper, we provide a pytorch implementation , as well as additional experiments on the importance of the recurrent network in the training process.

World Models introduces a model-based approach to reinforcement learning. It revolves around a three part model, comprised of:

Below is a figure from the original paper explaining the architecture. 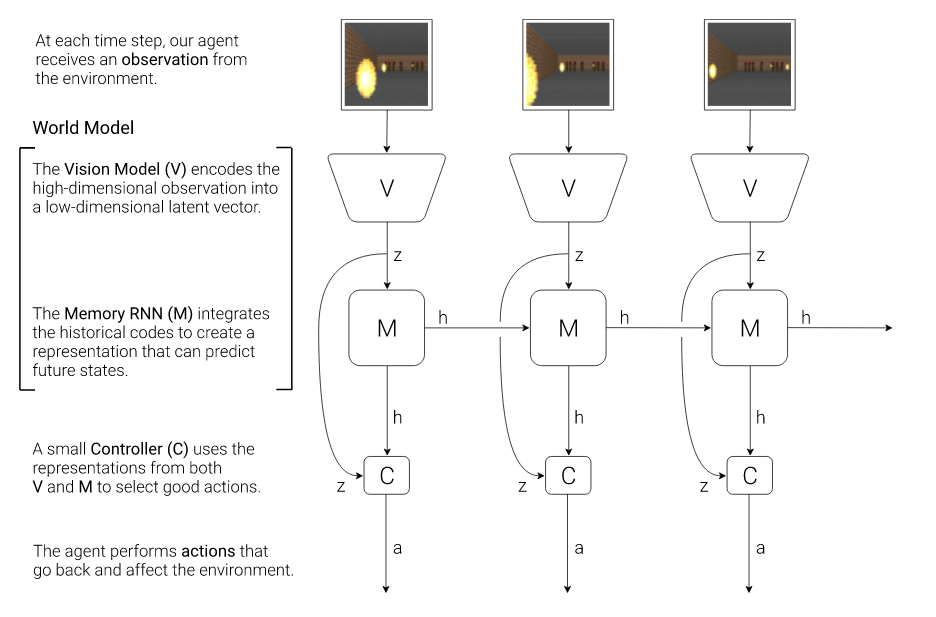 On a given environment, the model is trained sequentially as follows:

Alternatively, if the MDN-RNN is good enough at modelling the environment, the controller can be trained directly on simulated rollouts in the dreamt environment.

Reproducibility on the CarRacing environment

On the CarRacing-v0 environment, results were reproducible with relative ease. We were pleasantly surprised to observe that the model achieved good results on the first try, relatively to the usual reproducibility standards of deep reinforcement learning algorithms [5, 6]. Our own implementation reached a best score of 860, below the 906 reported in the paper, but much better than the second best benchmark reported which is around 780. We believe the gap in the results is related to our reduced computational power, resulting in tamed down hyperparameters for CMA-ES compared to those used in the paper. Gifs displaying the behavior of our best trained model are provided below.

We wanted to test the impact of the MDRNN on the results. Indeed, we observed during training that the model was rapidly learning the easy part of the dynamic, but mostly failed to account for long term effects and multimodality.

In the original paper, the authors compare their results with a model without the MDRNN, and obtain the following scores :

We did an additional experiment and tested the full world model architecture without training the MDRNN, keeping its random initial weights. We obtained the following results :

We display the behavior of our best trained model with an untrained MDRNN below.

It seems that the training of the MDRNN does not improve the performance. Our interpretation of this phenomenon is that even if the recurrent model is not able to predict the next state of the environment, its recurrent state still contains some crucial information on the environment dynamic. Without a recurrent model, first-order information such as the velocity of the car is absent from individual frames, and consequently from latent codes. Therefore, strategies learnt without the MDRNN cannot use such information. Apparently, even a random MDRNN still holds some useful temporal information, and that it is enough to learn a good strategy on this problem.

We reproduced the paper “World Models” on the CarRacing environment, and made some additional experiments. Overall, our conclusions are twofold:

This project is licensed under the MIT License - see the LICENSE.md file for details